In the presence of 40 ambassadors and MPs, Anani said that the graveyard has two coffins for a man and his wife who worked as a musician for Hathor goddess as well as more than of 50 mummies of buried birds and animals.

Mostafa Waziri, the secretary-general of the Supreme Council of Antiquities, noted that the cemetery was found during arresting a gang of antique smugglers in October.

He added that the ancient tomb is in great condition and its walls are decorated with colorful inscriptions. 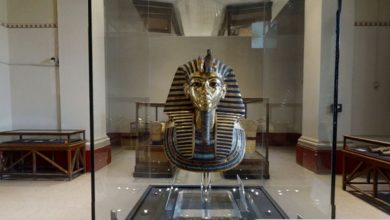 Enjoy the virtual tour for Tutankhamun’ s hall at the Egyptian Museum in Tahrir.