São Paulo – Archaeologist and Egyptologist Zahi Hawass said this Monday (17) that Egypt is a safe destination for tourists and called upon Brazilians to travel to his countries. “All of the [historic] sites are very safe. There is nothing that can happen to tourists,” he stressed during a press conference at the Arab Brazilian Chamber of Commerce in São Paulo. The researcher is in Brazil for a series of lectures (see full schedule at the end of this story).

One of Egypt’s main sources of revenue, tourism dwindled since the so-called Arab Spring, in 2011, and as a result of bursts of violence, especially in the Sinai Peninsula, including a Russian passenger aircraft which crashed in 2015. “Without tourism you cannot restore the monuments and the tickets [to the sites] are what pays for that. These are world heritage sites,” he said.

Hawass talked about a lot of new features for the next couple of years, such as the Grand Egyptian Museum opening, near the Giza pyramids in 2020, the reorganization of the Grand Pyramids sites, so that it really becomes an outdoors museum, ‘not a zoo,’ and the Museum of Egyptian Civilization in Old Cairo, which is going to tell the entire country’s history, among other things. 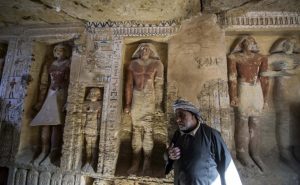 Said Abdel Aal, who works in excavations, at the 4,400-year-old tomb discovered in Saqqara

Said Abdel Aal, who works in excavations, at the 4,400-year-old tomb discovered in Saqqara

The archeologist also commented on the discovery announced last Saturday (15) of a 4,400-year-old tomb in Saqqara – near Cairo – the burial site of a priest and his family. The tomb is in great conditions. ‘It is a tomb from the Ancient Kingdom, I was there five days ago,’ Hawass said.

The Egyptologist addressed the search for Cleopatra and Mark Antony’s tomb. According to him, the responsible for the search is Kathleen Martinez, from Dominican Republic, and statues, coins and a rock with inscriptions referring to Ptolemy V (210-181 BC), Cleopatra’s ancestor and predecessor, were found during the excavations of a temple in Alexandria. ‘It’s the first time someone searches for Cleopatra’s tomb, they used to look just for Alexander the Great’s tomb before,’ commented Hawass.

He emphasized the recovery of 600 objects that had been illegally taken from the country in the last couple of years and a thousand artifacts that had been plundered during the 2011 revolution. ‘In the Museum of Cairo, they [the looters] wanted gold and “red mercury”, which is a legend some people believe in, a liquid that supposedly was in the mummies necklaces and granted powers to control demons and get rich’, he told. Few are the items that were not recovered according to Hawass.

As in the exclusive he gave previously to ANBA, he said: ‘I hope to discover something important until the end of the year.’ He was referring to his current searches for tombs of kings and queens such as Ramesses VIII, Thutmose I, Ankhesenamun, and even Nefertiti.

When questioned if he is confident he will make an actual discovery, Hawass said an archeologist can never say he or she is confident. ‘Because a curse will make you not find anything,’ he joked.

Hawass also complimented the Brazilian archeologic mission in Egypt, which is going t 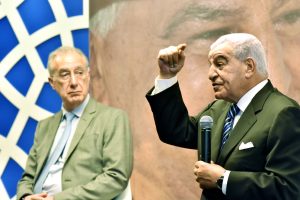 o have its third field stage in Luxor. ‘We hope to have more Brazilian expeditions. We know Brazilians love Egypt, and they are welcome to do more works in Egyptology,’ he declared.

He went to the Arab Chamber with Egyptian ambassador in Brasilia Alaaeldin Roushdy, and the trade consul in São Paulo Mohamed Elkhatib, and was received by the Arab Chamber president Rubens Hannun.

The archeorlogist gave a lecture in São Paulo on Sunday (16) and will do another one this Tuesday (18). After that he will be in Curitiba on Thursday (20), and Rio de Janeiro on Saturday (22).

For purchases in São Paulo and Rio de Janeiro through the website http://zahihawassnobrasil.com.br

In Curitiba prices range from BRL 65 to BRL 230 and registrations may be made clicking here. 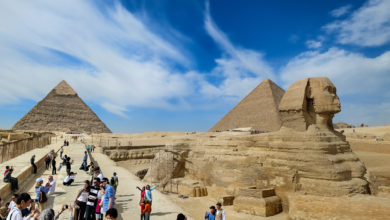 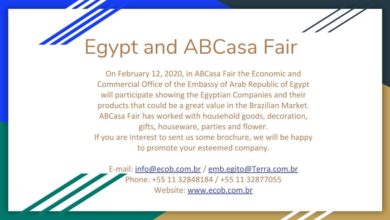