Enjoy the virtual tour for Tutankhamun’ s hall at the Egyptian Museum in Tahrir.
The tour explore the treasured collection of the boy king.

On the 4th of November 1922, British archaeologist Howard Carter made the most spectacular discovery in the history of archaeology: the tomb of the boy-king Tutankhamun. Painstakingly excavated over the course of almost ten years, its four small rock-cut chambers hidden beneath the sands of the Valley of the Kings yielded over 5,000 incredible objects, bearing witness to the life and death of this king.

Most likely the son of the “heretic” king Akhenaten, Tutankhamun ascended the throne at around the age of nine, in the aftermath of the great religious upheaval of the Amarna Period. He was married to Ankhsenamun, third daughter of Akhenaten and his chief queen, Nefertiti. Early in his reign, the golden pharaoh restored wealth and power to the great god Amun-Re, whose worship Akhenaten had suppressed. Although a recent CT scan of Tutankhamun’s mummy has revealed interesting new information about the techniques in his mummification, and has confirmed that he was about 10 when he died, the cause of his death is still uncertain.
Most of the objects discovered in the tomb of Tutankhamun on display here were actually used during his lifetime. Others, in contrast, were made specifically to be buried with him. What both types of objects have in common, however, is that they all stand as testimonies to their makers’ mastery of their craft, and to the great wealth that the royal treasury had accrued through the empire that the kings of the New Kingdom had built.
Among the most significant of Tutankhamun’s objects on display are:
The Gold Mask
The innermost coffin, made of solid gold
The middle coffin
The gold coffinettes for his internal organs

This virtual Tour is made in cooperation with the Ministry of Tourism & Antiquities and Virtual Mid East. 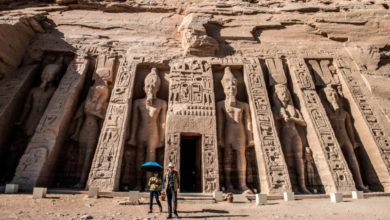 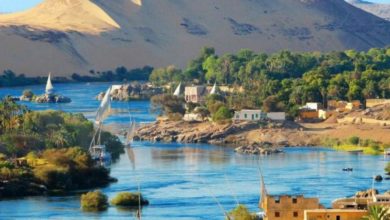