IN 1842, THE German Egyptologist Karl Richard Lepsius transformed understanding of Egyptian spirituality after he published a collection of ancient mortuary texts. Known in ancient Egypt as “The Chapters of Going Forth by Day,” Lepsius dubbed it the Book of the Dead. Its 200 chapters are a thrilling insight into beliefs about the trials, joys, and fears on the journey into death’s mysterious realm.

For centuries, it was assumed the writings found in Egyptian tombs were passages from ancient scripture. Later, when scholars learned to decipher hieroglyphs, they discovered that these texts were spells—magic “road maps” provided to the dead to navigate their way safely through the afterlife. (Explore the 4,400-year-old untouched tomb discovered at Saqqara.)

Although scholars had known of the magical content of the writings before Lepsius’s publication, his careful ordering of the spells and the assigning of a chapter number to each is the system still used to study them today. However, there is no uniform version of the Book of the Dead. Of the many versions of the spells that have been found, the texts’construction are not exactly alike—yet the arrangement of Lepsius’s publication helped scholars to see this body of work as a more coherent whole.

Passages have been found inscribed on rolls of papyrus, on the bandages used in mummification, on tombs, and on the sarcophagi and grave goods of the dead. Originally intended solely for the use of royalty, the oldest parts of the Book of the Dead were drawn from funerary writings known as the Pyramid Texts, which date back as far as the Egyptian Old Kingdom, to as early as 2300 B.C. (Discover the latest finds in King Tut’s tomb.)

How and when the Book of the Dead first came to be compiled is a mystery. The earliest known example appeared on the sarcophagus of the 13th-dynasty queen Mentuhotep (1633-1552 B.C.). Between the Middle and New Kingdoms, use of the Book of the Dead was no longer limited to royalty. Anyone with enough money to produce or acquire a version of the text could, it was hoped, increase their chances of a smooth passage through the afterlife.

By the New Kingdom (circa 1539–1075 B.C.), access to the Book of the Dead was more widespread. Some copies were lavishly illustrated and costly; others seem more mass-produced with blank spaces where the deceased’s name could be filled in to personalize their copy. Despite the text’s long evolution, however, its function remained the same for royalty and nonroyalty alike: to ease the passage of the deceased through the underworld, offering them protection to face the ordeals and terrors lying in wait there. (Take a look at Egypt’s stunning life-lifelike mummy portraits.)

Journey of the Dead

Excerpts from the Book of the Dead were intoned by a priest during the funeral ceremony at the tomb. Next came a series of rituals to prepare the dead for their journey. Among these was the rite called “the opening of the mouth,” in which ritual tools were applied to the image of the deceased on the sarcophagus. It was believed this ceremony reactivated the senses of the corpse. (Learn how to make a mummy in 70s days or less.)

For the ancient Egyptians this was a moment of hope as expressed in the ninth chapter: “I have opened up every path which is in the sky and which is on earth, for I am the well-beloved son of my father Osiris. I am noble, I am a spirit, I am equipped; O all you gods and all you spirits, prepare a path for me.”

The Egyptians believed that the dead person would embark on a subterranean journey, tracing the route of Re, the sun god. After disappearing with the setting sun in the west, Re passed under the world in a boat to return to his starting point in the east. During this journey, the deceased, aboard Re’s boat, would have to confront ferocious creatures barring the way to their new life. The most formidable of these was Apep, a serpent intent on stopping Re’s boat and bringing chaos to the world.

Apep would threaten Re every night. If the deceased were to come face-to-face with this terrifying creature, chapter 7 of the Book of the Dead was at hand to offer help:“I will not be inert for you, I will not be weak for you, your poison shall not enter my members, for my members are the members of Atum.”

Trial of the Heart

Having made it past Apep, the deceased would eventually arrive at a labyrinth, protected by a series of gates. To go through each one, they had to recite a specific text and call out the name of the gate. If the correct prayer was offered, then the gate would say: “Pass, you are pure.”

After the labyrinth, the next stop was the Hall of Two Truths, where the dead would be judged by a panel of 42 judges presided over by the god of the underworld, Osiris. The “defendant” would swear they were innocent of a lengthy list of potential sins. Chapter 125 of the Book of the Dead includes many examples, including: “I have not slain people… I have not stolen the gods’ property… I have not caused (anyone) to weep… I have not carried out grain-profiteering… I have not (sinfully) copulated… I have not been the cause of terror… I have not been impatient… I have not slain sacred cattle.”

After the confession came the climax of the trial: the weighing of the heart. Anubis, the jackal god of mummification, held up a pair of scales. In one dish sat an ostrich feather, like that worn by the goddess of justice, Maat, and regarded as a symbol of truth. In the other dish was the dead person’s heart, embodying the actions carried out in their lifetime. If the feather and the heart balanced the scales, the dead person would pass the test. Those whose hearts weighed too much were considered impure and condemned to several horrific fates.

The deepest fears of an ancient Egyptian contemplating their lot for eternity are eloquently summarized in chapter 53 of the Book of the Dead. One of the eternal punishments handed down was the prospect of having to eat one’s own excrement: “I detest what is detestable. I will not eat feces, I will not drink urine, I will not walk headdown.” Other dreaded sentences included perpetual hunger and thirst, being boiled, or devoured by a wild beast.

Of such importance was the weighing that the Egyptians fashioned amulets, the scarab of the heart, which were placed over the heart of the deceased before mummification. Inscribed on the back was often chapter 30 of the Book of the Dead: “Oh my heart which I had from my mother! O heart of my different ages! Do not stand up as a witness against me, do not be opposed to me in the tribunal, do not be hostile to me in the presence of the Keeper of the Balance.”

Rewards of the Afterlife

To the righteous, on the other hand, the way to paradise would now be opened. The virtuous could look forward to the plains of Aaru, “the fields of reeds.” Not unlike the world they’d left behind, this happy land of the dead abounded with rivers, mountains, and lush, fertile fields in which barley would grow up to five cubits high.

It was not, however, an exclusively spiritual paradise. There were physical rewards as well. As chapter 110 of the Book of the Dead reveals, corporeal needs and pleasures were not abandoned once one passed into the afterlife. Many of life’s pleasures—eating, drinking, and copulating, to name a few—existed there as they did in life. Specific meals are mentioned: A passage from the rubric to chapter 125 promises Ashens-cake, a jug of beer, a Persen-cake, and a portion of meat from the altar of the Great God.

The dead were also expected to labor: Planting and reaping crops were included as part of the afterlife in the Aaru. But work was not all that arduous, as the virtuous dead could now rely on an army of servants to help them. These were the ushabtis, statues entombed with them among the other grave goods. It was believed that magic would convert these statues into servants once the dead passed into Aaru. Each ushabti figurine had its arms crossed and held farming implements. On the lower part of each was inscribed a chapter from the Book of the Dead: “[I]f [name of the deceased] is accounted to do any work in the God’s Domain… the irrigation of the fields, or to water the banks, or to row sand of the east to the west, I will do it. Here I am.”

The Ancient Egyptian civilization, famous for its pyramids, pharaohs, mummies, and tombs, flourished for thousands of years. But what was its lasting impact? Learn how Ancient Egypt contributed to society with its many cultural developments, particularly in language and mathematics.

An emphasis on physical as well as spiritual redemption reflects the anxieties of a society troubled by the body’s annihilation. Nevertheless, throughout the Book of the Dead, the reward that the dead could expect if they made correct use of the text is confidently asserted: “He shall flourish and his children shall flourish… he shall be ushered in with the kings of Upper Egypt and the kings of Lower Egypt, and he shall be in the suite of Osiris. A matter a million times true.” 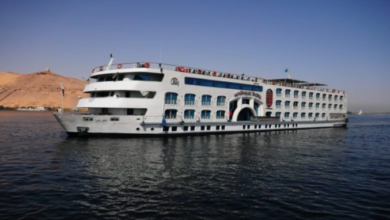